A recent media photo grabbed people’s attention. It showed actor and director Felipe Mattei, pouring olive oil on his breakfast cereal. He made the point that olive oil is a much tastier and healthier substitute for unhealthy animal fats such as cream or milk. So it is time to try to transform your breakfast now… 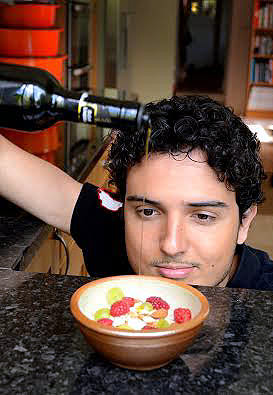 Olive oil has an important place in the thinking-person’s diet especially added to vegetables and salads, but over cereal?

Yet research shows that Mattei is not alone in his practice of adding olive oil to his cereal. Well-known chef and restaurateur Bruno Loubet at the Zetter hotel in London regularly breakfasts on porridge to which he adds olive oil, honey and a layer of chopped garlic.

He says: “When I was in Australia I came up with it, because all the ingredients are good for you. It keeps me young and healthy. My chefs are used to it now, but in the beginning it shocked them all.”

New York Times columnist Mark Bittman has been recommending savory oatmeal preparations for years. One of his suggestions is oatmeal, drizzled with a fruity EVOO and 1-2 tablespoons of black or green olive tapenade on the side of the bowl.

Another oats and oil combo is the “hippy breakfast” named such as it was common in the 70s but is worthy of a come back. This is a delicious combination of raw oats moistened with oil, and these days that could be EVOO, and sweetened with honey.

The demise of such a healthy and simple breakfast probably had much to do with the low-fat revolution that scared everyone off fats and oils for the last few decades.

Although increasingly this is being brought into question especially in the case of olive oil that has so many life-enhancing properties.

Granola, for example received a bad rap because of its high sugar and fat content but made at home it can be an incredibly healthy start to one’ s day.

The basic recipe is three cups of rolled oats, mixed with a ¼ cup of good quality EVOO & 1  tbsp honey. This adds a fruity and rich flavour to the oats as well as optimizing the health benefits.

Then according to one’s taste buds one could add ingredients such as: shredded coconut, raw cacao, a sprinkling of cinnamon or cardamom, a drop of vanilla essence, flax seeds (for further omega 3’s) dried and chopped raisins, cherries or apricots, pumpkin seeds, nuts such as pistachios and sea salt. 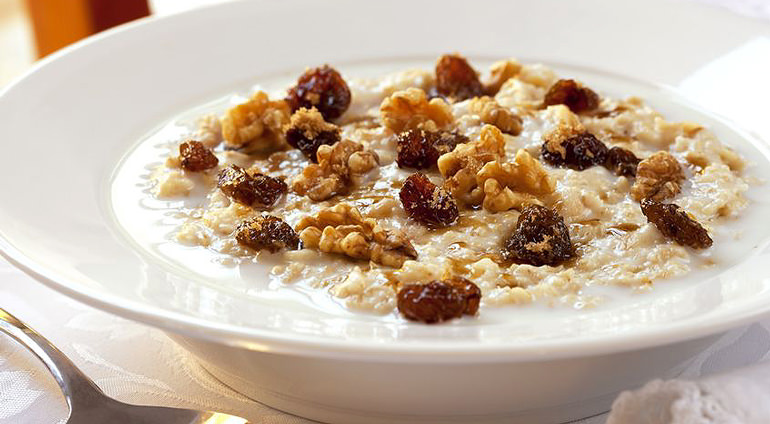 With such great healthy options available you might want to reconsider your breakfast regime to include the day’s dose of healthy olive oil.

Especially given that many studies show that successful and healthy people tend to prioritize the things that are good for them and their career and do these things first in the morning. This might include exercise, planning ahead, meditating or making headway on their hardest tasks for the day.

A mere 3.5 tablespoons of EVOO is the best dose for anyone at risk of cardiovascular disease.

It also helps reduce inflammation and is therefore helpful for those with arthritis as well as having a host of other health benefits.

So perhaps the habit of adding that healthy dose of olive oil to one’s cereal bowl might not seem so strange after all.